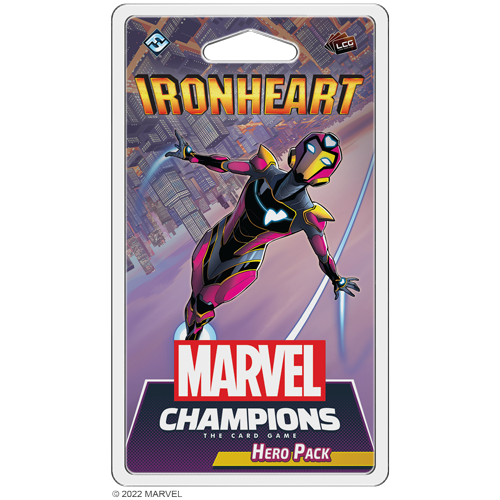 After a senseless act of violence took the life of her best friend and of her stepfather, Riri Williams used her supergenius intellect to reverse-engineer Tony Stark's Iron Man design and create her very own power armor. Now she soars the skies as Ironheart, determined to rid the world of cruel fates like the one she once endured.

This high-tech hero boosts into battle in this expansion pack, which introduces Ironheart as a new playable hero along with her fifteen signature cards. With a pre-built Leadership deck ready to play from the get-go, you'll be able to face down villains with Ironheart's arsenal of armors from the moment you open the box. With the unique ability to gradually and permanently "level up" her armor for the rest of the scenario, Ironheart is a fantastic hero who can put in serious work for any team.

Not a standalone expansion. A Marvel Champions: The Card Game core set is required to play.