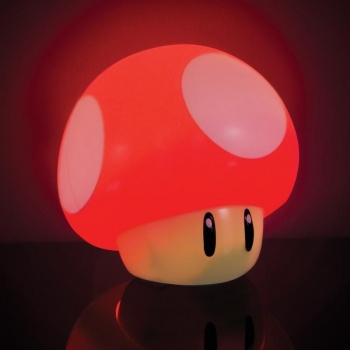 Level-up and illuminate your desk or shelves with this super-cute Super Mario Mushroom Light. This instantly recognisable Mushroom design makes a great gift for lovers of the Super Mario franchise as well as fans of retro gaming in general.

As you switch on the Mushroom Light it makes the officially licensed 'Level-Up' sound and glows with its trademark happy eyes. Shigeru Miyamoto, the creator of Mario, says the inspiration behind the Super Mushroom was the concept of mushrooms being associated with magical worlds, making the Mushroom Light ideal to see you into the land of nod or set a magical ambiance, at any time.

One of the most popular and instantly recognisable video game characters of all time, Mario first appeared in the iconic 1981 arcade game Donkey Kong under the name 'Jumpman'. Since then, Mario has become a legend within popular culture and has been a defining figure not just for Nintendo, but for the whole gaming industry. Since hitting the big time with Super Mario Bros. Mario has had huge success with other installments such as Super Mario Galaxy, Super Mario 3D World and the hugely popular racing spin-off Super Mario Kart.

These Mushroom Light is an officially licensed Super Mario product.