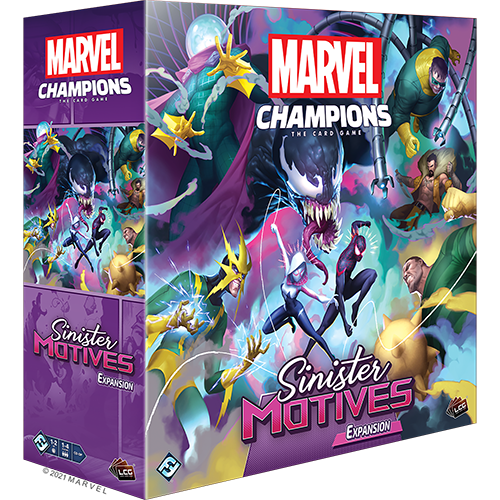 In the Marvel universe, those six words carry great significance as the driving principle behind one of the greatest heroes ever known: Spider-Man. This web-slinging, wisecracking hero is beloved by many, but he also has his fair share of mortal enemies. Fortunately, Peter Parker is not the only wall-crawler protecting the streets of New York from villains and their sinister schemes

In this expansion, you and your fellow heroes take to the streets and rooftops of New York City and face off against a rogues gallery of classic Spider-Man villains, including Sandman, Venom, Mysterio, and the notorious Sinister Six. As with previous expansions, you can play each of these scenarios individually or as part of a larger campaign, and with a sinister spread of new modular encounter sets, there will be ample opportunity to mix things up for all of your Marvel Champions games. Sinister Motives also kicks off a new wave of playable heroes for the game, starting with two iconic web-warriors: Ghost-Spider and Spider-Man (Miles Morales), both of whom come with fully pre-built and ready-to-play decks right out of the box.

Not a standalone product. A copy of the Marvel Champions: The Card Game core set is required to play.