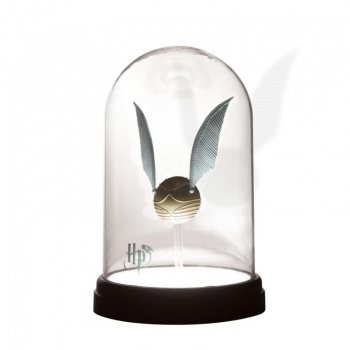 Capture the Golden Snitch, proudly put it on display, and use it to light up your room!

This Golden Snitch Light features the Golden Snitch floating inside a tall illuminated bell jar. Watch the Snitch glisten when the light is switched on, and brighten up your desk, bedside table or shelves.

A fabulous gift for Harry Potter fans and lovers of the magical game of Quidditch, the Golden Snitch Light is 20cm (7.9") tall and USB powered (USB cable included).

First published in 1997, J.K. Rowling's bestselling series of novels following the magical adventures of Harry Potter, Ron Weasley and Hermione Granger has since become a cultural phenomenon. A huge success in novel form, the world of witchcraft and wizardry was then given big screen treatment in 2001, launching one of the most successful blockbuster film franchises in cinema history. Harry Potter is instantly recognisable to millions of people across the world, and is hugely popular among fans of all ages.